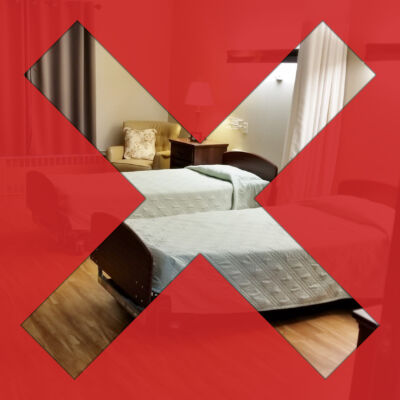 Private Rooms are the Future

Serious reimbursement, regulatory and structural planning needs to take place now for the inevitable future when private rooms in nursing homes are the standard.

The Moral Test of Government

The importance of nursing homes to the soul of our nation in caring for two of these groups was tacitly recognized recently by President Biden in his first State of the Union address when he proclaimed that the standard of care in nursing homes is and should be a national priority.

President Biden’s clarion call to focus on care in nursing homes will likely lead to considering many elements that are necessary for achieving quality, including staffing, technology, funding, and incentives. A key area that must also be part of this national discussion are the structural aspects of quality.

The current reimbursement system for nursing homes is a financially driven model with incentives that are often at odds with current clinical best practices, customer desires, and frankly what is ethically and morally appropriate.

However, more beds do not mean better resident outcomes and experiences. More beds often mean a greater risk for COVID-19 infection, more logistical challenges for resident cohorting and staff separation, and an increased risk to residents from mental and physical decline.

The current system is an antiquated system – designed in a different era – with different understandings of science, care models, and customer expectations. Indeed, many facilities were constructed with three and four bed wards, which is certainly not the standard today. Nevertheless, four-bed wards are still permitted by the federal requirements of participation for nursing homes if they existed prior to 2016. After 2016, CMS only permitted newly certified facilities to have two beds per room.

The future of nursing homes, however, is private rooms.

Private Rooms are a Quality Indicator

Private rooms are and will be increasingly demanded by nursing home residents and their loved ones on their behalf. This is what people want, and for good reason.

Imagine, after living on your own or with family for most of your life, reaching a point where you need nursing home care and then being placed in a semi-private room with a stranger. Moving into an institutionalized setting is stressful enough without adding a pervasive lack of privacy. Single-resident rooms in nursing homes enhance residents’ sense of home, privacy, and control.

We now know that such stress not only causes and exacerbates physical maladies, but is also devastating to mental well-being. This runs directly contrary to the goal of long-term care, which is to maximize health outcomes and quality of life for those in their later years.

Studies show that single-resident rooms have been associated with improved sleep patterns and reduced agitation and aggressive behavior among people with dementia in long-term care facilities. Lack of sleep, agitation, and aggressive behaviors result in an increase in falls, injuries, poor intake, and weight loss, not to mention the impact on the general quality of life when one experiences chronic sleep deprivation. Better sleep and less agitation and aggressive behaviors will also decrease the need for antipsychotic medications for nursing home residents, which has been a CMS initiative for the last several years due to their untoward effects when used for prolonged periods of time.

That private rooms are a quality indicator has been underscored by the pandemic. Recent studies of nursing homes are finding that lower room occupancy was associated with lower COVID-19 infection rates and mortality. This makes sense when dealing with communicable diseases, especially those that are airborne.

Normally, when someone is diagnosed with a communicable respiratory illness, they are placed in a private room on isolation. If they have a roommate, that roommate is considered to be exposed and must be quarantined in a separate private room. If the facility has no private rooms available, the exposed resident is forced to stay in a room under continuous exposure to a serious illness, which was frequently the case for nursing homes with primarily semi-private rooms during COVID-19. To try to segregate residents during outbreaks, facilities were continuously moving residents in accordance with their status (e.g., infected, not infected, and not infected, but exposed). This often resulted in numerous room changes in the course of a couple of weeks, not only traumatic and disruptive to residents, but also likely increasing the spread of disease in buildings as positive residents moved through hallways to other rooms for quarantine. Had all of the rooms been private, facilities would have been able to keep all residents in their rooms and isolate or quarantine in place, without the need for unnecessary and unsafe room relocations, likely limiting the spread.

Sharing a room and bathroom also increase the risk of the spread of other very serious illnesses/infections for nursing home residents, including several species of pseudomonas and candida (yeast), antibiotic-resistant organisms such as methicillin-resistant staphylococcus aureus (MRSA) and vancomycin-resistant enterococcus (VRE), and clostridium difficile. All of these infections can be deadly to vulnerable populations, and incidences for all these infections have been shown to be lower in single-patient compared to multi-patient rooms.

Studies conducted in long-term care facilities have for quite some time found higher resident/patient satisfaction and family preference for single-resident rooms. Even without the obvious quality of care impact of private rooms, our seniors and their families will continue to demand them into the future because of the impact on their quality of life.

Private Rooms for All

Once the obvious benefits of private rooms for resident health, safety and overall wellness are acknowledged, it should be inarguable that in today’s world those benefits should not be reserved for a subset of nursing home residents. Currently, though, Medicaid only pays for semi-private rooms – thus, creating a two-tiered system where the benefits associated with private rooms are reserved only for those who are rich enough to pay extra. This is untenable knowing what we know now.

Thus, in the short term, Medicaid programs need to be restructured to incentivize (i.e., pay more) to providers who invest in private rooms. In the longer term, federal and state governments need to make more transformational changes to address the structural discrimination that is endemic to our current reimbursement system.

There should be no discrimination in terms of the standard of care we provide to our seniors.

Now is an extraordinary time, as we find ourselves hopefully in the twilight of the COVID pandemic and looking toward what has been called the “silver tsunami” as the baby boomers begin to turn 80 over the coming years.

We cannot sit flat-footed as we see this wave approaching. We must consider structural changes now and design our future based on what we have learned, not merely on the inherited systems of another age and another time.

We need a system that anticipates the silver tsunami – one that recognizes the current best practices in mental and physical health, that responds to current expectations of our populace, that learns the lessons of the recent pandemic, that does not discriminate, and that incentivizes investment in modern environments. In sum, a system that meets the future and the moral test of government.